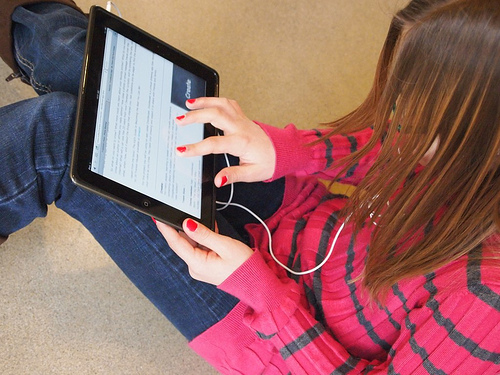 I got a call from a friend a few days back, who happens to be a web designer. In our phone call we discussed the next big trend in web design and what skills must be acquired to stay ahead in the game.  We realized the growing trend for websites to have mobile and tablet (touch) versions along with the usual web version. This has opened doors for new possibilities and opportunities in web interface design. With the explosive growth of Tablets and solid growth projections for future, tablets are becoming the way people consume web content. Even though my phone call ended with mutual agreement on cracking up HTML5 instead of Flash, the thought stayed with me. Few days after, with Apple’s first quarter results and the January 2012 Textbook Initiative, the future started to come out of the fog and dawn in my face.

It has been two years since the launch of the iPad. It was a huge bet from Steve Jobs in launching a product with no category in an entirly new form factor,the iPad has become the numer- uno choice for Tablet computers today. It is phenomenal how a product which defined a category is becoming the chosen device for education. Not just the iPad but the Tablet (form factor) itself is fast becoming as solid tool for education, entertainment and business.  At the 89th Social Media Breakfast we discussed the opportunities in education, entertainment and business and brainstormed on ideas for the next big game in tech.

Check this video which sums up Apple’s recent announcement to reinvent the textbook. From iBooks-2 to tools for teachers to create new textbook content for the iPad. Nivesh Sharma pointed out about Pearson Publishing’s initiative to digitize all their textbooks. (Interesting) It is not just for education, but for iPad/Tablet app developers, kids are a big target market. There’s a huge collection of apps specifically designed for kids on the app store and the touch interface makes the experience intuitive as well.

Another trend I noticed with the iPad/Tablets becoming popular in the business world, was the concept of BOYD (Bring Your Own Device). Even though many organizations did not adopt iPads for enterprise initially, many IT departments had to support the iPads/Tablets owned by a growing number of employees. BYOD is becoming an acceptable norm in the industry. Another exciting possibility which got us hooked was Augmented Reality and its applications. Check this cool video about where AR is headed, its a bag full of ideas.

Tablets offer a form factor which offers a very intimate viewing experience. Companies like Netflix offer their entire library of content for the iPad and subscription based music services like Spotify are already becoming popular. What particularly got us excited (geeks?) were the two toys made with Augmented Reality and well supported by iPad, Tablets and Smartphones. The AR Parrot Drone and Sphero.

If you’re fascinated with the evolution of social media and tech and want to discuss, share and brainstorm ideas, feel free to check out our Meetups. We meet every friday morning in West Delhi (India). Join us 🙂

Are Google’s Social Search Changes for Better or Worse?

Last week, Google made yet another change to its Search. What seems to be part of a bigger game-plan to push and integrate Google+ even more deeply into its Search ecosystem. Google’s calling this update: “Search plus Your World.” This brings Search + Social into the forefront of online marketing strategies. No longer can search and SEO be your only weapon of choice for the battles of online dominance. The question is – Is it for the better or for the worse? That’s what has us and the tech world divided it seems. Let’s explore both.

Jack Menzel, product management director of Google search, explained that now Google+ members will be able to “search across information that is private and only shared to you, not just the public web.” Watch Video. Infact Matt Cutts wrote this on his blog “Once you know the trick, it might not seem like magic anymore. In fact, this is the “things just work” experience that everyone in the tech industry strives for. I suspect as more people take Search plus Your World out for a test drive, they’ll quickly experience similar magical “Aha!” moments like I did. Give this new feature a whirl: once you see how much better personal search can be, I don’t think you’ll want to give it up.”

Twitter Reacts: “We’re concerned that as a result of Google’s changes, finding this information will be much harder for everyone. We think that’s bad for people, publishers, news organizations and Twitter users.” Over at SearchEngineland, Danny Sullivan has compiled a series of damning examples of the ways Google’s new interface promotes Plus over relevancy. Long story short: It’s a huge step backwards. One post on Gizmodo also had a post title ‘Google just made Bing the Best Search Engine’. The wrath Google is facing with this decision is also brewing an Anti-Trust commotion.

What do you think?

Is Twitter being oversensitive, or did Google misuse its monopoly power? Have you spotted any difference in your search results? How would this effect Google Search, Publishers and Ad Revenues tied to it? Vote in our Poll below and let us know your thoughts in comments section as well